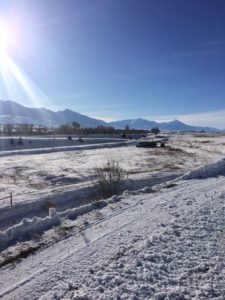 A new little series of mostly-unedited thoughts, the publication of which is inspired by my old friend and mentor Louis B. Jones’ Diaries that he’s been publishing, intermittently, for ages. A couple of new sets just dropped, and I thought, maybe I’d be brave enough to throw out these unfinished ideas I’m working on as I walk Hank every morning, along this mile or so of creek just that feeds into the Yellowstone.

Because my day job has gotten busy again, I’ve taken to dictating into the Notes app on my iPhone using the little microphone icon. The voice-to-text is surprisingly good, and I’m finding it’s a good way to capture what I’m thinking about. There are a couple of essays I’m percolating, as well as the latest reincarnation of the nonfiction book.

Listening to The Wild Ones on audiobook, Jon Mooallem makes the point that wild animals become worthy of preservation only after we have essentially unwilded them, that is, they are no longer frightening because they are no longer a threat to human beings.

His example is the mountain lion in Southern California which was a symbol of wildness until it started eating people’s pets in their backyards. Then it became a terrifying predator. Also as Himeself and I have discussed ad infinitum — the issue of wolves in Yellowstone and the creepy way the “wolf watchers” personalize them, and make up narratives about them.

Mooalem also had an interesting discussion of how folks in Churchhill who actually live with the polar bears have a larger faith in polar bear survival in light of climate change than the scientists do. Scientists are crunching the numbers and looking at calorie counts where folks in Churchill are looking at resilient bears they know and in whom they have confidence.

Thinking of the wilderness edge, places like Himself’s cabin, like htis road, as neighborhoods — there’s a feminist critique to be made of the  way wilderness is validated above all other forms of nature in the American nature writing tradition.

There’s all this pushback against the concept of the Anthropocene inlarge part because we refuse, in order to avoid grieving, we refuse to to acknowledge that even though we have managed to preserve some chunks of wild country and some wild populations of animals and plants, the larger earth has been pretty definitively overrun.

And so for those many of us who for whom wilderness was the Holy Grail – it was the dream — it was the thing we ran toward — it was the place where we parked all of our ideas of freedom and authenticity and being able to get away from the corrupting influences of civilization — for all of those people who spent their lifetimes fighting for wilderness — it’s completely understandable that the idea of the anthropocene is horrifying and that there’s pushback. However if there’s one thing I learned from the loss of not just Patrick but both my brothers — is that the only way through greif  is to accept it.