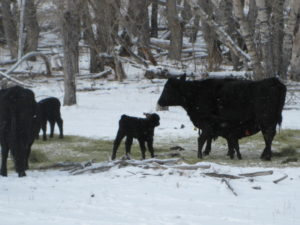 When I drove down the road from the cabin the other morning, what should I see but new babies! There were six of them hanging out in the shelter of the State section. At this age they seem far less interested in eating hay than in nestling in it — a wee cattle nursery.

I love this time of year in Montana. From now until summer there’ll be field after field filled with baby cows and baby sheep (and sometimes baby goats). We’ll also get to look forward to the bambis — who are beyond cute.

Of course, we were also awakened at three AM by a pack of coyotes chasing something just on the far side of the shed. A deer probably — I can’t imagine the bunnies were out tempting them at that hour, and there were a bunch of them, four or five probably. It brought out something elemental in me and I found myself hiding under the covers!

Spring in the mountains — aside from the fact that we got a foot of snow today, it seems to be on its way …